Meet a hero. Amaterasu
Play with the shining deity
0

Gaming experience contains multiple components. Players follow a thrilling story, where small twists of the plot motivate moving forward in the adventure and discover the ending (or even a few different endings). Also, players become hooked by innovative gameplay mechanics, which give the joy of learning new tricks and developing unusual skills. Another powerfully appealing aspect of gaming is affection to virtual personalities. We spend long hours with game characters, building a kind of relationship with them - it’s quite important to feel the heroes to get involved in their story and become motivated enough to learn game mechanics.

Gaming heroes are mostly fictional but they are real in our hearts. It’s so nice to know them better. Let’s take a closer look at characters from the games on Caer Sidi. In this article, we talk about Amaterasu, a personality from the Japanese mythology and a hero from the game Altar: the War of Gods.

Many gamers love their heroes so much that they want to have those personalities in the real world too. Hero figurines help players and developers to enhance the gaming experience.

Goddess of the Sun and Universe

Amaterasu is a deity of the Shinto religion, which came from Japan. The cult of this goddess is known since the VIII century, and this amazing personality is still quite popular in modern society. Traditionally, Amaterasu is the goddess of the Sun and even the whole Universe. Her name means “shining in heaven.”

Of course, most of the real-world mythologies have a similar deity: Ra in Egypt, Surya in India, Sol in Rome, etc. Still, Amaterasu is quite special - she is a woman in a male-driven society of old Japan, and this is something.

There are lots of legends around the personality of Amaterasu. They have many common aspects with other myths, in which people try to convey their vision of the surrounding world through simple stories, based on relationships of family members, friends, and enemies. Only if you are interested in the Shinto religion and Japanese mythology, the Amaterasu legends may be interesting for you. 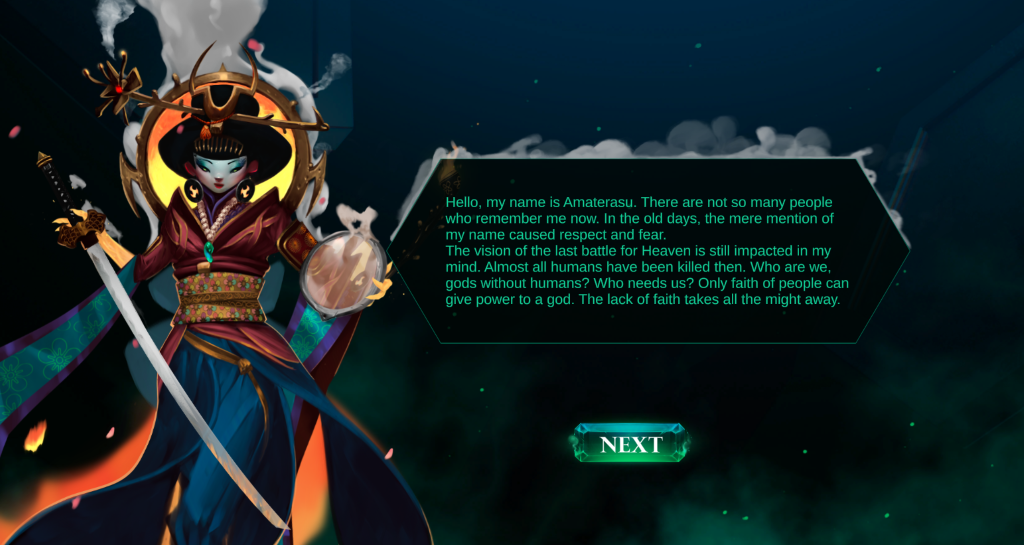 There are various ways to “come closer” to Amaterasu. Some people worship this goddess in Japanese shrines. Others read legends about her and make connections to modern scientific (or their personal) world view. Such attitudes are totally ok but they are barely suitable for most people. The image of Amaterasu is appealing and interesting, so it should not be presented in a boring way.

Games are not boring (at least good games), so many gamers prefer to get acquainted with mythological creatures in their virtual adventures (especially story-driven). We know Nordic deities from the latest God of War game and Greek deities from Assassin's Creed Odyssey. So, where we can meet Amaterasu?

Amaterasu can get different incarnations to appear in front of humans. In this exceptional game, she is not a woman but a female white wolf, surrounded by mystic flames.

The art style of this game is absolutely fascinating - the graphics here are like made with watercolors. Just watching the world is a pleasant experience. The gameplay of Okami is based on explorations, solving puzzles, and battling opponents. The game story is super interesting - you should be ready to read dialogues. Often, Okami is compared to The Legend of Zelda series.

Okami HD, the remastered version of the classic PS2 game is available on PS4, Xbox One, and PC.

Altar: the War of Gods

Amaterasu takes her traditional appearance in this game, developed by our partners from the Wanted Games studio. In Altar, she joins many other deities in their fight for the faith of people.

The game has been built around the fictional plot - gods create special tokens to give their devotees, and people start using these tokens in a board game to attract additional power for deities of their choice. That board game is Altar, and everyone can join the token battles.

Altar: the War of Gods is still in its beta version, and you can take part in testing. User data, such as results of matches, transactions with tokens, and general progress in the game will be stored in the distributed registry of Tangle. Tokens of Altar are collectible, and they get additional value from their victories or famous owners.

Amaterasu has her token in Altar. She is the primary god of the Japanese pantheon. Supporting entities help her to defeat Aztek and Indian deities (Hindu personalities are available in Altar Starter Pack).

The game Altar: the War of Gods also has a tabletop version - check it out in Caer Sidi Store. With it, you can get the Celtic pantheon (in the online version as well).

Getting real-world figurines of in-game heroes is quite a trend in the game industry. We at Caer Sidi not only follow it but we also boost this trend to the next level - by producing phygital assets. They are physical souvenirs that unlock unique digital content.

Caer Sidi Store offers phygital figurines of Amaterasu, created on the base of her image in Altar: the War of Gods.

Amaterasu is only one of many heroes of the Multiverse of Caer Sidi. Soon, we’ll have even more interesting characters connected to our service - thanks to gaming content from our partners. Please, visit this page for developers if you want to start a win/win cooperation with Caer Sidi.

Follow us on social networks and join our Discord server to not miss articles on the Caer Sidi blog and some exciting info from our company.