The team of Caer Sidi works hard to deliver our users lots of quality gaming content. At the moment, this is one of the priorities in the development of our service. That’s why we are so glad to announce another game in Caer Sidi Store - Guns'n'Stories: Bulletproof VR, developed and published by MiroWin.

This is a game in Virtual Reality. We offer our customers to purchase its activation code for Steam - and the price is twice lower than on other platforms.

Another product recently added to Caer Sidi is Koi-Koi - a tabletop game with the traditional Japanese cards Hanafuda. This offer is special! Games come with a phygital token in each box.

Stories of an old man

The core gameplay in Guns'n'Stories: Bulletproof VR is based on shooting enemies. Players stand behind some barricades (a kind of) and shoot at attacking angry and probably evil guys. This playing mechanic is not new. Something similar we had even in old NES shooters, where players killed bandits from their plastic pistols. In Guns'n'Stories, the technical aspect is much more advanced - the game was released in 2018, after all, and it’s a Virtual Reality experience. Another, seemingly secondary feature makes the game stand out from many competitors. It’s an old man telling his hard-to-believe stories who makes the game Guns'n'Stories: Bulletproof special.

Players follow conversations between that guy and a boy. The old one talks about his past hilarious adventures. The young one tries to push the stories to the path of common sense but often he gives up and allows the grandpa to talk his nonsense.

Those shootings become a logical part of the stories - at least in the game campaign. Still, the great idea hasn’t got its best implementation. The stories are not in VR. You listen to them staring at rather flat pictures with not much animation. Quite soon, such kind of storytelling may become even boring, so players will wait for the shooting to begin.

Many guns, many opponents, and still some repetitiveness

Guns'n'Stories: Bulletproof offers many kinds of bandits. These characters and the very location are depicted in a nice colorful style as if you stay in the middle of a Wild West cartoon. Of course, those enemies are all different not only in appearance but also in their statistics and behavior. They even shoot back, so you should act super fast and shoot super accurately. On the high difficulty levels, it would be better to roll all over your room to avoid deadly virtual bullets.

In-game guns feel differently. Ok, you hold standard controllers from your VR system all the time, and still, changing pistols to a shotgun or a rifle gives a new feeling in the game. 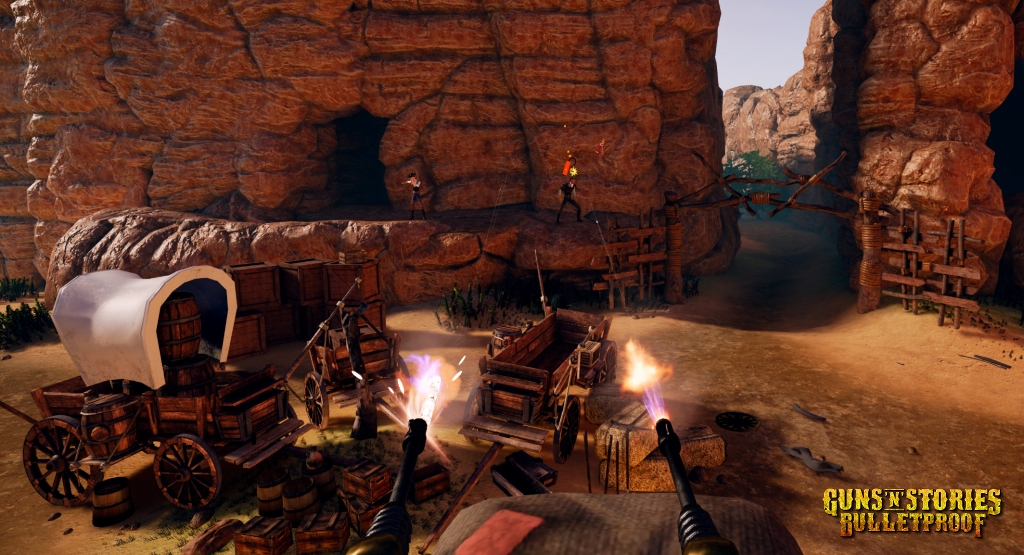 The overall experience of playing Guns'n'Stories: Bulletproof is fun, and still it lacks some great innovative ideas of the direct competitors, such as Superhot. At the end of the day, you just stay there and shoot again and again. The ambition to set a new high score may become powerful enough for you to return to the game and develop your skills to the level of perfectness. But even in this case, it’s better to add some other games to your playing experience to not be tired of the repetitiveness and really enjoy Guns'n'Stories: Bulletproof.

For instance, you can give a bit of rest to your eyes and body and play some great tabletop games from Caer Sidi Store. Take a look at the tabletop version of Altar: the War of Gods. it invites in strategic on-board battles of deities from real-world mythologies. With the physical copy of Altar, you will also get unique creatures of the Celtic pantheon for your online game.

Caer Sidi is open to partnerships with game developers. If you want to add your product to our ecosystem, check out the information on this page and don’t hesitate to contact us.

Stay in touch with Caer Sidi on social networks and join our Discord community.